Explore the newspaper archive housed at the museum. It represents the largest collection of the Sheerness Times Guardian dating back to 1890, making it an excellent reference resource for the study of local history. It is possible for families to research their family history by finding pictures and articles from the past. Also on display are old postcards, photographs and reference books all about the Isle of Sheppey and its history.

‘Primitive art’ is a term used to define those objects whether paintings or sculpture that have been made by an artist with no professional training. The paintings and drawings by Harold Batzer, a local man, depict imaginary scenes based upon the history of the Isle of Sheppey,  which have been taken from a number of different sources.

Harold Batzer is a 20th Century Primitive who owes much to the tradition of the Primitive Art of the 17th and 19th Centuries. His work is beautifully executed in the minutest detail. In his trees, each individual leaf is painstakingly crafted, but his drawing of figures and the precise over drawing of his buildings are typical of the ‘primitive’ artists work. 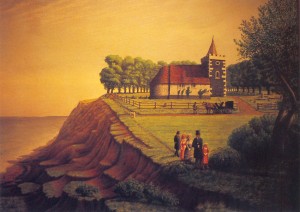 There are a large number of radios in the collection dating back to the early 20th century. Of special interest is a crystal radio set which is in full working order. There are also some old gramophones that can be wound up and played. The collection includes many 78 rpm records which are pre-1960 in age. These can all be played on the gramophones.

Sheppey is also famous as ‘fossil island’ where Lower Eocene, 50 million year old fossil remains of marine animals can be found quite commonly. The fossils found here are unique to the London clay deposits and are found nowhere else in the world preserved as beautifully. Apart from shark teeth and individual fish vertebra it is possible to find the remains of crabs, lobsters, ancient fish, reptiles like turtles, and very rarely crocodiles.

Talks and displays can be arranged with a local expert.

The Victorians are very well represented in the museum. There is a fine collection of Victorian artefacts, such as every day objects of the time. These include fine china from many old business, kitchen implements which still work well today and a complete cast iron range. there is a fine collection of Victorian ladies evening gowns and afternoon tea dresses, beautiful fans, glove, beads and hair accessories. A very lifelike model displays the costume of a Victorian gentleman – he has often been mistaken for a real person!

The Island during the 1st and 2nd World Wars

There are representative uniforms from each of the armed forces that were based on Sheppey. The collection is also represented with many artefacts such as gas masks, various types of ammunition including some large artillery shells. Alongside this there are many civilian objects such as ration books, ID cards and many old documents.